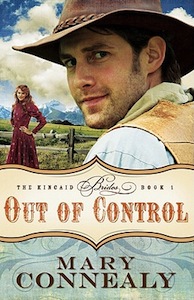 Stranded in the caverns when someone removes the rope she uses to climb in and out, Julia Gilliland begins to hear cackling voices. Is it any wonder she’s screaming hysterically when a local rancher happens to ride by?

Rafe Kincaid has been running the Colorado family ranch alone since his parents died and his brothers left. He avoids the cavern where his youngest brother nearly lost his life years before until the day he is scouting nearby and hears a woman screaming for help from its depths. The rollup ladder the Kincaid boys used is still hidden under a rock. Rafe descends into utter blackness, feeling the old panic welling up, only to discover the woman has lost her senses. He kisses her to make her stop fighting him…and it works. He kinda likes it, then he’s horrified to think she might be sixty and ugly.

She’s not. But she’s just as stubborn and controlling as he is, determined to go back into the caverns she’d grown to love to more closely examine fossils she’s found. She’s certain she can get articles printed in scientific journals back east, thereby providing some income to free herself from her father, who leaves Julia and her young stepmother (pregnant and with a toddler) to fend for themselves in a wilderness shack for days on end.

Rafe sees he needs to protect headstrong Julia from her mystery enemy, whether she wants him to or not, and probably the only way is to marry her, whether she wants him to or not. Julia doesn’t want protection, and she certainly doesn’t want to marry a controller like Rafe–not when she likes to be the one calling the shots. Instead, she has dreams of being loved someday. Could she be falling for the bossy rancher?

Author Mary Connealy has a humorous voice that truly comes into its own in this historical western romance pitting two controlling characters against each other. She’s rapidly become one of my favorite authors of this genre because she can pull off all this snark while telling a suspenseful story. Anything by Mary Connealy is on my highly recommended list, and Out of Control, the first in a trilogy about the Kincaid brothers, is no exception.

This novel is available in the church library. So are books 2 and 3 in the series: In Too Deep and Over the Edge.